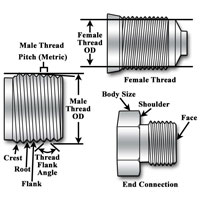 Threaded connections are often referred to as a process connection type. For Dwyer product specifications, this connection type is typically NPT (National Pipe Thread), which is an American standard thread. These connections allow products to be installed directly into piping or with the use of threaded fittings.

Tapered threads tighten to create a higher pressure fluid type seal. The flanks compress against one another due to the thread taper as the fittings are attached. A sealant compound or sealant tape must be used to ensure a leak free seal and for ease of disassembly. The leak tight seal is the reason most process instrumentation use tapered thread connections.

The standard for tapered threads in the United States is NPT, or National Pipe Thread. The specifications of NPT are defined in ANSI/ASME B1.20.1. The taper rate for all NPT threads is 1/16 inch per inch measured by the change of diameter of the pipe thread over distance. They can be referred to as MNPT or NPT(M) for male (external) connections and FNPT or NPT(F) for female (internal) connections.

The international standard for tapered threads is EN 10226-2 and ISO 7-1, which are similar to German DIN 2999, British BS 21 and Japanese JIS B0203. The British standard, BS 21, is commonly referenced with the description BSPT, British Standard Pipe Thread. Many Dwyer products are also available in BSPT connections, please consult us on availability.

Though ISO and NPT threads can look similar, they can never be used together, as they have different taper angles, root and crest, threads per inch, and pitch, which would result in non-sealing fittings. Thread gages, such as plugs for female fittings and rings for male fittings, can be used to test connections to standards and ensure proper fit and seal.