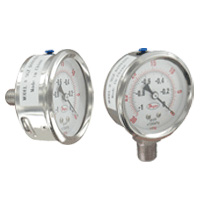 Question: What is the difference between a glycerin-filled pressure gage, and the dry version?

Answer: While dry pressure gages are the most commonly used gage, they do have some drawbacks.

1. The dial may become obstructed by moisture build up in the gage.
2. Temperature drops may cause unrepairable damage to the sensor’s diaphragm, bellow, Bourdon tube, or pistons.
3. Surges of pressure may be more likely to instantaneously burst the gage.

These gages feature a scale and face connected with glycerin, resulting in reduced visibility issues in humid conditions and protection from pulsations and pressure spikes within a system. The fluid also mitigates the effects of vibrations and internal friction of moving parts.