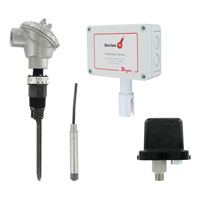 Many Dwyer Instruments, Inc. products have enclosures that are designed to be rated weatherproof, dust-proof, or even submersible. There are two main rating codes for enclosure protection classification: NEMA and IEC.

In the United States, the National Electrical Manufacturers Association (NEMA) has publication 250-2003, Enclosures for Electrical Equipment, that is commonly used for ratings. Underwriters Laboratories (UL) has similar ratings to the NEMA ratings. Meeting a NEMA rating on a product can be self-declared by the manufacturer based on product testing; whereas having UL approval to the rating requires testing by UL for proof that the product meets the standard.

NEMA Type 2 is indoor drip-proof rated. In addition to the protection of Type 1, the enclosure provides a degree of protection with respect to harmful effects on the equipment due to the ingress of water from dripping and light splashing. 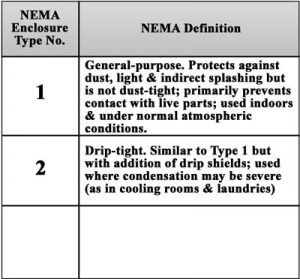 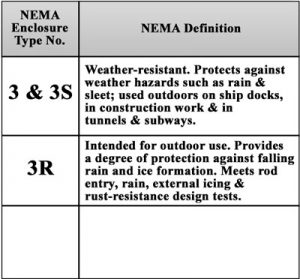 There are many derivations of Type 3, including type 3R. Type 3R is the same as Type 3, except it is not protected against wind-blown dust. There is also Type 3S, 3X, 3RX, and 3SX that are uncommonly used in instrumentation and controls.

NEMA Type 4 is water-tight and dust-tight rated. In addition to the protection of Type 3, the enclosure provides protection of ingress of water from splashing water and hose-directed water. NEMA Type 4X is the same as Type 4, with the addition of protection against corrosion. 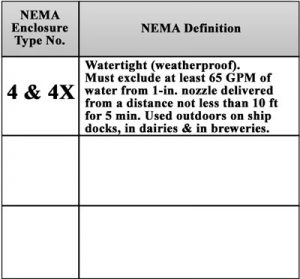 NEMA Type 6 is submersion or immersion rated. In addition to the protection of Type 4, the enclosure provides protection of ingress of water from occasional temporary submersion at a limited depth. Type 6P is the same as Type 6, with the addition of protection against corrosion and being rated for occasional prolonged submersion. 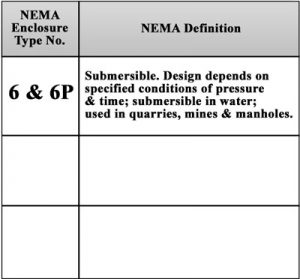 There are also NEMA Type 11, 12, and 13 that can be seen compared to the others discussed in the chart shown. 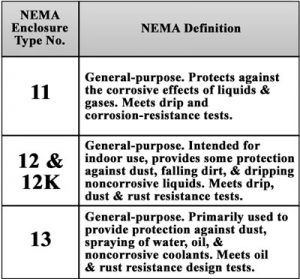 The ingress protection rating (IP code) is from the International Electrotechnical Commission (IEC) and is defined in standard 60529. The code is constructed with levels of protection (for example, IP65). 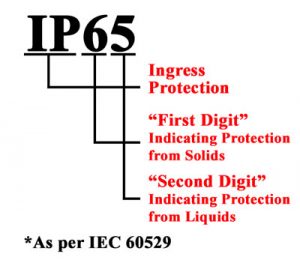 The first digit in the code indicates the level of protection that the enclosure provides against access to hazardous parts and the ingress of solid foreign objects, according to the size of the object.

The second digit in the code indicates the level of protection that the enclosure provides against the ingress of water.

An example of a product with an enclosure rated IP65 would be a rating of dust-tight and protected against water projected from a nozzle.

The NEMA code includes properties not included in the IEC code, such as corrosion resistance and construction practices, that makes it impossible to equate an IP rating to a NEMA rating. It is possible, however, to go from a NEMA rating to an IP rating that is equivalent or lower in standards. For instance, we could say that a product rated NEMA4 would meet the rating of IP56; but, we cannot say that a product enclosure rated IP56 has any equivalent in the NEMA rating.