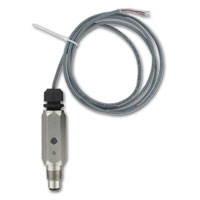 Thermal dispersion flow sensors use a temperature element that is heated up beyond the media temperature. Based on calorimetry, the flow moving past the sensor will have a cooling effect that is directly proportional to the flow velocity. The heat is convected from the heated probe surface to the boundary layer of the fluid flowing over the heated surface. There are several thermal dispersion techniques using either single or multiple temperature sensors. Commonly, a resistance temperature detector (RTD) is used as the sensor. Multiple temperature sensor models use a temperature difference between the two sensors to calculate flow.

Thermal dispersion flow switches have many advantages over mechanical flow switches because there are no moving parts, such as paddles or vanes. This offers better long term reliability and life expectancy. There are no moving parts to wear that could create leaks or switch failures; no parts to get jammed or stuck from particulate in the media; and no parts that can break off into the flow causing downstream damage in pumps or valves. They are omni-directional offering easier installation without concerns on flow alignment. Additionally, since a thermal switch only needs to be inserted 10% into the flow, the pressure drop is much lower.