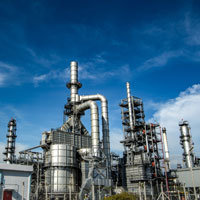 After being offloaded, produced water is run through a debris filter into holding tanks. In order to detect and prevent clogging in the debris filter, a differential pressure switch is often installed. The Dwyer Series 43000 Capsu-Photohelic® Pressure Switch/Gage is an ideal instrument to use for this purpose, functioning as both a pressure switch and a precise pressure gage, with easily adjustable setpoint indicators.

There are several holding tanks involved in the process of cleaning produced water, including the holding tank (immediately after the debris is filtered) and the settling tank (after the electrostatic coagulation procedure). Instrumentation is used to measure the levels inside the tanks, as well as control the flow of liquid in and out of the tanks. The Dwyer Model DPL110 Dual Point Level Switch is an excellent choice of instrument for monitoring the level inside a tank. The Model DPL 110 can maintain high and low limits for liquid level, using conductivity technology to sense liquid level.

Throughout the entire process, the flow of water through the cleaning equipment needs to be controlled. The Series WE20 Butterfly Valve is great for this purpose, using an air supply to drive the actuator ports. This Butterfly Valve is available in two-position or proportional control, making it the best choice for any part of the produced water cleaning process.

Let Dwyer help you manage your produced water applications. For more information on any of the products mentioned above, please visit our website or call 1.800.872.9141 to speak to a technical engineer.