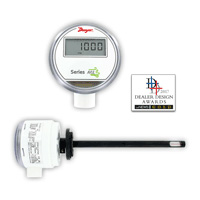 Dwyer Instruments, Inc. offers a multitude of sensors for monitoring air velocity in HVAC systems. Some of this instrumentation has a simple construction (Pitot tubes, for example) while others are more complex, such as hot-wire anemometers.

The initial term and first “hot-wire anemometer” was developed back in 1914 by Louie Vesso King. He is also accredited for King’s Law, which mathematically describes heat transfer in air flows using a heated wire. As the air moves over the wire, it causes a loss of temperature in the wire and removes some of the wire’s heat energy.

Typically, hot-wire anemometers are configured with two separate sensors. The first sensor, the temperature compensation sensor, measures the actual process media temperature inside of the duct or pipe. The second sensor, the velocity sensor, is heated to an elevated temperature which is then cooled by the air flow in the process. The difference in power between the known constant and the effects of the air which is moving through the process, trying to drive the temperature down on the velocity sensor, can then be correlated back to an air velocity. This process is most commonly achieved using a wheatstone bridge circuit.

The recent release of the Air Velocity Transmitter, Series AVUL, is Dwyer’s latest example of a hot-wire anemometer with additional features and enhancements. The incorporation of BACnet and Modbus® communications and a unique engineered coating allow the sensor to be used in harsh environments. This transmitter was the Gold Award Winner in the Testing and Monitoring product category of the 2017 Dealer Design Awards Program sponsored by The Air Conditioning Heating & Refrigeration News Magazine (The ACHR News).