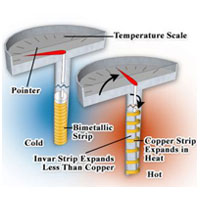 Dwyer Instruments, Inc. offers many temperature measuring products that use bimetal sensors as the sensing element. 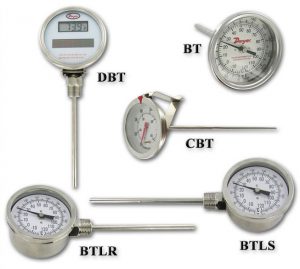 As the temperature applied to the metal sensor assembly increases, the metal strip with the larger temperature coefficient of expansion expands more. The difference in the expansion in the metals makes the assembly of the two metals bend. Iron-nickel alloys, such as Invar, are often used because of their lack of expansion or contraction with temperature changes. 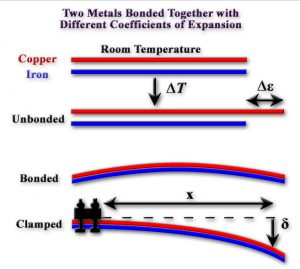 Typically the metals are attached in a spiral or helical configuration. The spiral or helix is fixed on one end and the other end will twist or rotate directly proportional to the temperature change. 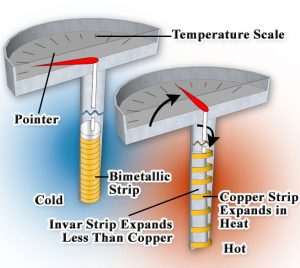 A calibrated gauge with indicator is attached to the rotating end for direct indication of the sensed temperature. The metal sensor assembly may be left open to sense gas temperatures, but is usually housed in a metal stem to protect the element and to allow use in fluids.

Thermometers come in many accuracy levels according to application need and are designated according to ASME B40.3 standards. Shown below is a guide to the ASME accuracy grades from AA to D. Many grades have varying accuracy across the span. 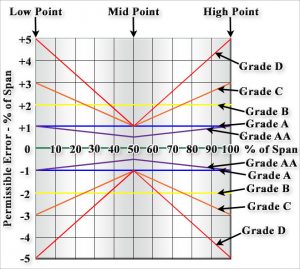 Bimetal Thermometers are very popular as they are low cost and offer reasonable temperature accuracy. They are also very robust compared to liquid thermometers, simple to use, and easy to read. The stainless steel stem offers great chemical compatibility for a variety of applications.