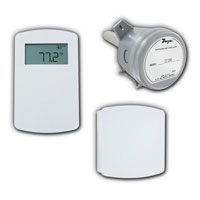 Dwyer offers several carbon dioxide measuring products that use non-dispersive infrared sensors as the sensing element. Carbon dioxide sensors are commonly used in building automation systems to monitor air quality.  The level of carbon dioxide is indirectly proportional to the amount of people in a space and can be used to adjust ventilation for the space.

There are two basic types of gas sensing technologies: chemical reaction and infrared spectroscopic. Most chemical reaction sensors are electrochemical sensors, which are not as reliable as they can interact with multiple gases and wear from interaction with the gas.

Non-dispersive infrared, often called NDIR, sensors deliver high accuracy and fast response time.  NDIR sensors have no contact with the gas, making them more reliable, and are constructed for specific gases so that they are unaffected by other gases.  NDIR sensors are the most reliable method for detecting carbon dioxide gas.

NDIR sensors are based on infrared spectroscopy, the principal that molecules absorb specific light frequencies that are characteristic of their structure. When the frequency of the infrared light is the same as the vibration frequency of a bond, absorption occurs.  Infrared light absorption of a particular frequency or wavelength creates a signature for conclusive identification and analysis of the gas and concentration level.

Infrared light that makes it through the chamber and filter in the carbon dioxide absorption wavelength is then sensed by the detector.  The difference between the light emitted by the source and the light sensed by the detector for the carbon dioxide infrared wavelength is used to calculate the gas concentration since the amount of light absorbed is directly proportional to the gas concentration.

The level of infrared light that the detector receives plays an important role in sensor drift and measurement accuracy. The infrared light source will have degradation of illumination over time from film buildup and age.  Dual-wavelength sensors use a reference light wavelength that is unaffected by the sensed gas.  As the infrared light source changes over time, the gas measurement can be compensated accordingly, eliminating sensor drift errors.  Dwyer Series CDT, CDTR, and CDTA all have dual-wavelength sensor compensation.